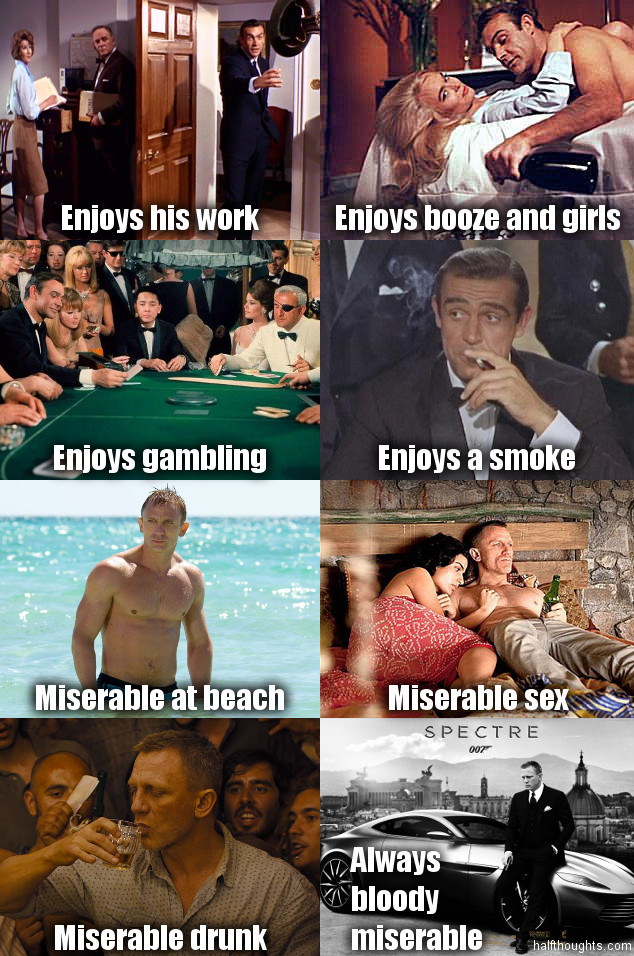 The appearance and attitude of Commander Bond has changed in the past 10 years more than in 44 before that.

One could dismiss it as a necessary response to the Austin Powers trilogy, but it is hard to argue that contemporary moviegoers have appetite for characters that take themselves and their missions very seriously – from Christian Bale’s Batman to Harry Potter.

If James Bond is the epitome of a desirable man – does it mean that while in 1960s sexy was associated with careless, authority-defying, promiscuity and 1990s were all about metrosexual charm and self-indulgent glamour, we live in times in perpetual misery?

According to the Mental Health Foundation 2015 report, in the UK, 70 million days are lost from work each year due to mental ill health (i.e. anxiety, depression and stress related conditions), making it the leading cause of sickness absence.

And it is not a regional issue caused by dismal climate – according to the same report, mental health problems constitute the largest single source of world economic burden, with an estimated global cost of £1.6 trillion (US$2.5 trillion) – greater than cardiovascular disease, chronic respiratory disease, cancer, and diabetes on their own. (In the UK, the estimated costs of mental health problems are between £70-£100 billion each year and account for 4.5% of GDP.)

What does living in miserable times mean for branding & marketing?

This site uses Akismet to reduce spam. Learn how your comment data is processed.